I have decided not to fly anymore as environmental issues have become much more important to me. It’s not that much of a sacrifice really because I am rather scared of flying and haven’t done it much anyway. However, I would get over myself to see some places. The Easter Islands are one of those places and I wrote about it in March 2016

Maybe I would have become an explorer if I would have been born 200 years earlier. As a child, I loved to read my parents encyclopedia and learned about other countries. My grandparents had a globe made out some sort of plastic, and I loved it.

I am a huge fan of Julia Cameron’s “The Artist’s Way” and one of her exercises to be more in tune with our artist’s nature is to write a list of imaginary jobs or professions we would like to do and guess what? One of mine was “Explorer”!

Of course, I was lucky that my parents and grandparents loved travelling, so I had the chance to go to half of Europe before I was 20 years of age. I’ve never made it outside of Europe though.

There are a few destinations outside Europe that I would love to go to as I told you last week. And to be honest: The more I write about travelling, the more I want to get out and about again and at the same time I am happy to be soon able to settle down and get a beautiful home.

“Funny creatures humans are” as Yoda would say.

The last destination I have on my travel bucket list is “Easter Island” and it somehow fits perfectly to write about it in Easter Week. 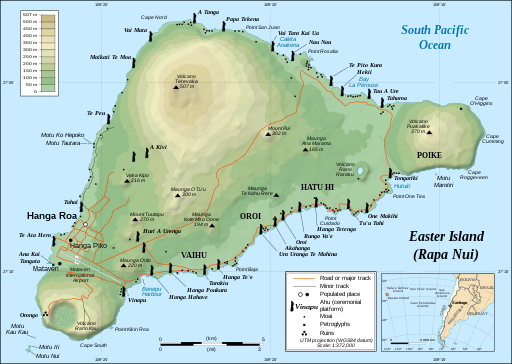 I have wondered a lot why Easter Island is called that. It belongs to Chile but is West of South America, so it can’t be the direction that gave it its name. Reading up on Easter Island Wikipedia told me that Mr Roggeveen from the Netherlands “discovered” it on Easter Sunday in 1722.

That’s somehow fitting because they must have felt like finding an Easter Egg in the vastness of the Pacific Ocean. According to National Geographic the “next door neighbours” to Rapa Nui as it’s original inhabitants called Easter Island are at least 1000 miles (!!!) away. Most of them rather more than 2000!. Incredible!

How incredible must those first settlers have been who managed to travel that distance with canoes between 700 and 1100 BC. Yes, I know opinions are divided about that. Some say it was a lot earlier but never mind.

I have heard about Easter Island and its monstrous statues which are a sign that their inhabitants were great builders. Not so great environmentalists though unless some rodents were the reason. The reason for the decline of almost all trees on Rapa Nui. There is the theory that the first settlers had some stowaways in their canoes (maybe those boats were rather ships and not just canoes????!) and brought in rats which might have eaten all seeds of the Easter Islands trees. Therefore no chance or growing their forests.

No matter how it came to be: In the end, the trees were gone and soon arable soil too. You can imagine how the storms might be in the middle of the Pacific ocean. There is no chance anything stays put on a volcanic island.

I am sure there is a lot more to tell about Easter Island but in the good tradition of searching for Easter eggs, I let you explore this on your own. But are there any exotic destinations you would like to go to?