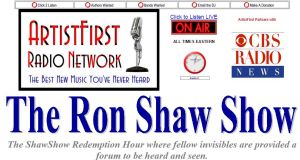 Today I am very honoured to have Ron Shaw on “The Bee Writes…”. A man with a huge heart supporting other authors and artists and with so much humour you might fall off your chair laughing….or not? Who knows?

But enough said: Let the man talk for himself!

How would you describe yourself in one paragraph?

I’m just an old man trying to do the best I can for my family and friends… old, young and new. I’ve led a colorful life, mostly, early on in black and white, but the colors have exploded over the years. People have been too kind to me, and it’s high time their gifts are shared with others by me. I have a lot of people and kindnesses to pay forward.

A fun fact about you?

I’d suggest there is no fun fact about me, and will defer an answer to this one if provided by those who really know me. In short, the answer may well continue to be nothing. As my family and friends might convey, “Whale, you’re where jokes go to die.” ‘Whale’ is my nickname. Apparently, simple jokes even escape my abilities to pass a little fun along

What made you write in the first place?

Bee, this is a fantastic question to which I could write a novella in response. I’ve never wanted or considered trying to write. This shows in my poor attempts to do so. But, with that said, the condensed answer to your question is probably best in this forum.

I was visited by God in early October, 2013 during a near death experience or the most wonderful dream any human could experience. I wish all people could see what I was shown during that fateful night’s, beautiful repose in October, 2013.
During the sleep, I ‘died’ and spent what seemed like an eternity traveling back and forth to Heaven. The ‘voice’ that I came to fully understand was that of God told me, “Write the book. Now, wake up!” After which, He snapped his fingers in my NDE or dream and I awoke instantly at 6 a.m. The book Seven Fish Tree is the result of me fulfilling God’s order.

Bee, Seven Fish Tree was written in less than thirty-seven hours, straight through, and I haven’t stopped writing since. God gave me this mission, and I can only hope it’ll improve with time and copious amounts of words. Like a good southern boy, I continue to use adverbs… sparingly, against all complaints.

But, God didn’t tell me what to do with the book. So, like a baby among wolves I crawled forth to learn how to have it published. Yes, I was devoured.
I’ll tell anyone who inquires that my first book SFT belongs to God. The rest are mine inspired by and through Him and that wonderful night in October, 2013.
To date, I have three books published, one soon to be published (this week or next, if I’m lucky), a completed faction manuscript waiting at my publisher’s for the take-off word, a short story soon to be published in an anthology, as well as other works in progress. I’ve been beavering away at words as my UK mates would say.

At Amazon and elsewhere I have Seven Fish Tree, The Yellow Bus Boys, and Transmutation The Life of a Twisted Cop for those willing to take a chance on me as a writer.

My ghostly short story The Dead and the Dying will appear in an anthology entitled Spirited Tales that will be published this year. Some excellent authors are involved in this anthology, including author Annie Acorn. When will it be available? I can’t say, but I’m working hard on Annie… and yes, Annie, it’s all my fault.

Annie Acorn of annieacornpublishing.com and @Annie_Acorn at Twitter is my new publisher, and Bee, she’s marvelous.

Which Author has influenced you and why?

What is your favourite book?

Just one? This is not fair, but if I had to pick just one. The Bible in various versions has provided the most comfort for many decades. It’s the one book that’s always near me, and personally, it is the first one sought in the best as well as lowest of times.

Your writing ritual (if you have one)?

Actually, none to speak of. I write as the characters and their stories dictate. I do tend to like to write in the wee hours of the morning as my family sleeps, but also, like now, throughout the day as the urge demands.

Your secret “sin” when you write?

I remain sinless… right, but none beyond caffeine, chocolate, cookies, hot water, the occasional lemon, honey and cinnamon mix, and mostly, quiet solitude which are rare and apparently sinful around here.

Do you suffer from writer’s block and if, what do you do against it?

Never, and frankly, it baffles me when others say they experience it. Maybe, I am truly blessed with verbosity or this too is so much fluff or a poor back story filled with angst, dread, and author validation.

Your advice for apprentice writers?

Be a storyteller first, foremost, and forever.
Follow your own heart, your words, and your path.
It’s your story.
Never allow others to dictate who you are as a writer.
Be bold, and it’ll show in your works.
Become thick-skinned as quickly as possible, because once you have work out there, get ready for the white noise blasted your way by others.
Realize everyone and I do mean everyone is a critic, including you and me.
Simply, learn how to be genuinely thankful that those who nay say think enough of you to actually read your words… hopefully after purchasing them.
Always, thank everyone for their interest in you regardless of the number of stars given on an review or the total lack of providing one.
Write what you know, and you’ll soon discover the door to knowing more will open widely.

Dear Ron, it was a pleasure to have you on “The Bee Writes…”! 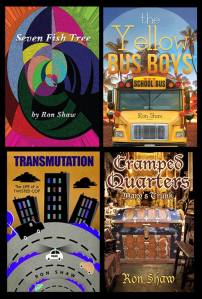 You want to know more about Ron and his books? Please have a look here: